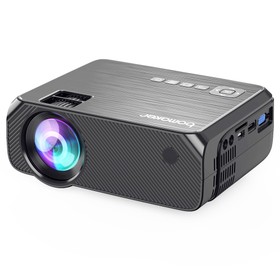 HD WiFi Projector On the Go

BOMAKER HD projectors have a wifi function, which enables fast wireless connection with iPhone, iPad, Mac, Huawei, Android phones, and Laptop. (Supporting Miracast on devices that come with Windows 10. Miracast Android devices include those that are 4.2 and later.)

The Bomaker TV projector can project what you've seen on small screens onto a huge 35-300 inch screen, at a closer throw distance than any other typical projector. Equipped with integrated hi-fi stereo speakers, the SRS audio system emits a powerful sound all around